WASHINGTON A transgendered man, a rock climber, a police lieutenant -- among other men -- had a message for the Obama Administration: mental wellness comes from sharing one's story.

Sponsored by the Department of Health and Human Services as part of a larger initiative (#bro2brohealth) to encourage men to sign up for health care during this open-enrollment period, the listening session brought together men's mental health advocates from around the country.

As a medical reporter who routinely sits in scientific sessions, listening to academic clinicians share their objective findings on the mechanisms of health, I found it a stark contrast. If medical doctors ever share a patient's story to make a point, it typically is to emphasize how a scientific finding has either been proven or disproven, and often, how the revelation impacted that clinician's practice. I rarely hear doctors tell their patients' stories in order to emphasize how the individual patient felt, and how the recognition of that emotion impacted their overall quality of health.

But that is what every single man who spoke wanted the officials from HHS to know: "This is how it feels to be inside my skin."

I believe what happened at HHS the other day is a sign of revolution. Rather than busy themselves with what society says a man "should be", these men are instead opting to be authentic. They are examining what they really feel as a human being faced with any given situation. In so doing, they are assuming control over their own health destinies, and rejecting the idea that they have "failed" somehow because they have feelings they don't hear other men -- including their doctors -- discussing.

In all, eight men spoke at the listening session. What I heard from each man who spoke was a variation on something like this:

"Here is what happened to me (fill in the blank). It made me feel (fill in blank, typically, some form of agony). Men shouldn't have those feelings, so then I felt alone, like I didn't fit in, like I didn't matter.

"Then I felt hopeless. I nearly (fill in blank: killed myself, drank myself into oblivion, became violent, or became unresponsive to my loved ones, etc.).

"Then I became unhealthy. I couldn't function. I couldn't contribute. I didn't feel like a man is 'supposed' to feel. Instead, I felt ashamed."

Across the medical specialties, health is generally seen as a matter of fixing and curing and even "owning" the right method to "correct" patients. But what if the path to health, and especially mental health, is validation, not correction? What if just being "heard" rather than "treated" could be part of standard care? This could be particularly important for men, who comprise nearly 80% of the nation's suicide victims according to 2015 estimates from the Centers for Disease Control and Prevention, often due to untreated (or, as I think of it, unacknowledged, i.e., unspoken) depression, anxiety, and trauma.

Rather than wait for a "cure" to being who they are and how they felt, these men sought to heal themselves. They didn't do it alone, but by asking others, usually other men, to listen. In sharing their respective stories, these men relieved the pressure they felt to hide, to pretend the so-called aberrations in their lives weren't happening. They stopped suffering in silence. They got better.

Their respective forms of storytelling were as varied as the men themselves. Iden Campbell, a transgendered man who felt ashamed and isolated for much of his personal journey created The Campbell Center to "resolve community fragmentation that results from unaddressed and untreated mental illnesses and substance addictions." He now reports that he still deals with depression, but copes well, in part because he helps others tell their own stories, and sees how this heals them of their hopelessness. Since its founding in 2007, The Campbell Center has become a key point of contact for those seeking mental health services in Washington, D.C. and else where in the South, and is funded in part by a grant from the Substance Abuse and Mental Health Administration.

Rourke Weaver found his nearly nine years of sobriety through running the Boulder, Colo. chapter of Phoenix Multipsport, a non-profit facility that offers men with 48 hours or more of sobriety, a place to lift weights, do yoga, learn to rock climb, hike, and find "bro" time. "Men need to focus on something together, to share a bond in order to achieve a goal," according to Weaver. If a man needs assistance while lifting weights, he can be assured that the guy in Phoenix Multisport who spots him is also recovering from an addiction. Everyone there shares a similar struggle and pain, so no matter their walk of life, their vocabulary is shared. Feelings of alienation -- a noted risk for suicide -- are quelled.

Denver Police Lieutenant John Coppedge had difficulty sleeping after a close friend and fellow officer was fatally shot in the head. For four years, he experienced increasing fear and anxiety, remembering what happened to the late officer.

"I failed to take care of myself because of [the police force's] tough guy, macho culture," said Lt. Coppedge. But once he started speaking up to others in the Denver Police Peer Support Program, he started to feel more solid. The Peer Support Program was founded in 1982, the year10 Denver police officers took their own lives. Since then, the force's suicide rate has been

reduced by 80 percent. "It's a huge win. The issue is to teach our officers it's okay to talk about their trauma and stress," said Lt. Coppedge in the video, Breaking the Silence, distributed nationwide as part of a network of outreach programs to law enforcement about suicide prevention in their ranks.

These kinds of healthy entrepreneurial initiatives can have a powerful impact not only on our healthcare system, but on our overall economy, and on our national morale.

Through sharing their stories, the anguish these men felt might not have disappeared entirely (pain is inherent to the human condition, it should be remembered) but they could bear it, each of them said. And so, they could return to work, to responding to their families, to taking care of themselves. To serving.

Put in economic terms: unlike so many men who succumb to addiction or the ravages of depression, these men stayed employed, found meaning, and so were motivated to contribute to society rather than spiral out of control and become a burden. They largely avoided needing public assistance, including in some cases, for expensive medical care, which when combined with a lack of productivity from mental disorders like depression, psychiatrist Paul E. Greenberg, M.D., has estimated costs the U.S. upwards of $210 billion annually.

They did not become criminals and so did not need judicial services, including costly incarceration: A 2013 report indicated that nearly half of all federal inmates suffered from a mental illness -- usually major depression or symptoms of trauma.

Instead, the contributions these story-telling men are now making have the potential to prevent other men from losing hope, losing employment, and becoming a drag on society.

Despite the Affordable Care Act, access to care among men varies. In a later HHS session held at the White House that same day, in addition to lax attitudes toward preventive care among many men, several speakers described how men in the various communities they serve feel ashamed to ask for help, even when they know something is wrong. The speakers frequently cited that men have a belief that if they feel pain, they are somehow diminished as a man.

Access to healthcare services is essential. But what's the point of having access if you don't acknowledge something is wrong, that you require intervention? For these men, telling their stories allowed them to put their lives into perspective, to get their strong arms around the fact that their pain and misgivings mattered. Once validated -- not corrected -- they could carry on as real men do. Maybe that will mean availing themselves of further healthcare, but it certainly seemed in these men's lives to mean their health began to improve.

What will HHS do with this information? Because ours is a world where money matters and where healthcare policy increasingly is based on evidenced-based medicine, I hope that at the very least, HHS begins to collect metrics on the financial impact these various organizations' are having, and on the health outcomes men like these are experience when they talk about their pain.

If so, perhaps in the not too distant future, I will sit in one of those scientific sessions and hear about how medicine has evolved to include the power of the personal tale. Perhaps I will file a report on the statistical significance of listening and sharing compared with staying silent as relates to health outcomes. And not just for men, but for women and children, too.

Until then, these "anecdotal" cases -- as doctors are wont to call what they have no verified data to support -- of how when laymen shared their stories, they felt whole again, seems to me important enough already to report.

"We can't counsel our way out" 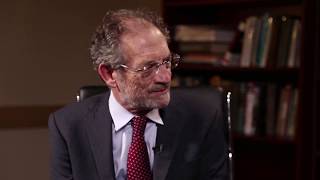 Finding meaning in the pain: the role of existential depression in our nation's opioid crisis

Helping to build immunity to anxiety and depression: CrossTalk comes to Washington, D.C. in 2018

What if psychoanalysis were available in your internist's office?

Using the BRAIN to explore what is possibly the last frontier here on earth...the space between our

Living with psychosis: people, not specimens